These days, we associate Ducati with tire-shredding 200 horsepower superbikes and the all-conquering, impossibly hip Scrambler. But in the years after WW2, Ducati was best known for producing a tiny 98-pound motorcycle called the Cucciolo.

Cucciolo is Italian for ‘puppy,’ and the bike was named after the high-pitched bark of its tiny exhaust. By 1952, an incredible 200,000 Cucciolos had left the factory, but few survive today. And outside Europe, they’re as rare as hen’s teeth.

So it’s great to see some love for the humble 49 cc single, with this immaculate restomod from Tony Prust of Analog Motorcycles. The owner is Michigan man Del Thomas, who’s been Tony’s customer since 2013. 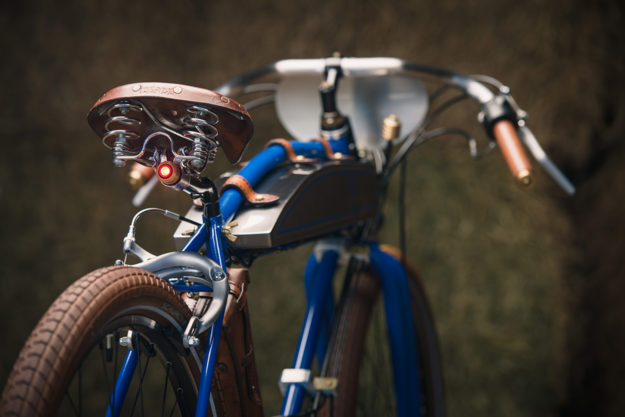 “Over the course of our friendship, he’s commandeered a few Cucciolo engines to complete six decades of Ducatis. He also found a prewar 1930s Iver Johnson bicycle frame, a modern front fork set up, and a cool vintage Ideale leather seat.”

Del got as far as mocking up a Cucciolo board track-style bike, but then life got in the way—so he dropped off the project at the Analog shop in Illinois, a couple of years ago. “There was no rush,” says Tony. “So it sat in the shop, and everyone who walked through the doors would stop and look at the little Cucciolo.” 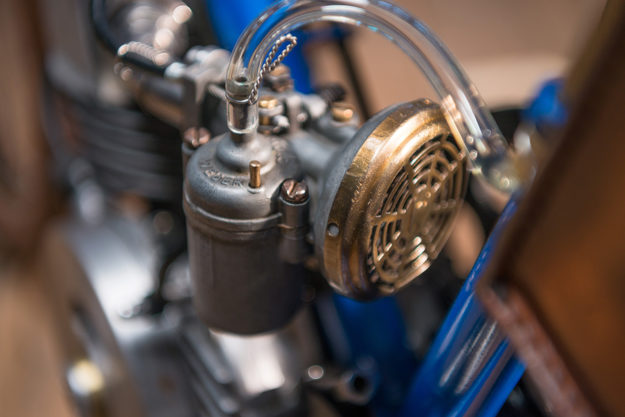 Then one of the five racks in Analog’s workspace came free, so Tony started thinking about what to do with the vintage Ducati.

“The original design aesthetic was along the lines of our ‘El Matador’ Triumph Bonneville,” says Prust. “A vintage look with natural metals and patina. Del had mocked up a tank out of cardboard, but we ended up making one using stainless steel. Cardboard doesn’t hold fuel very well!” 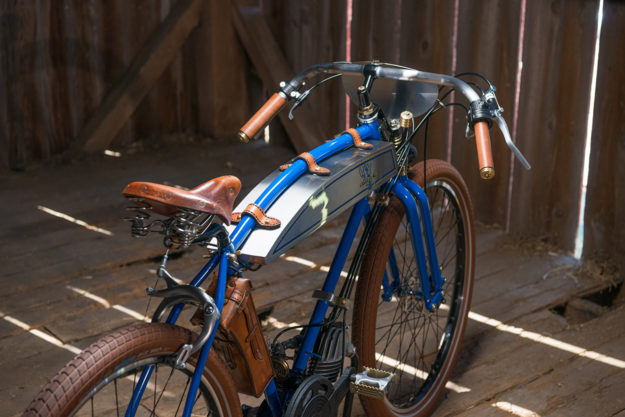 The frame looked cool, but once stripped, hadn’t aged very well. “We fixed some stuff on it, but it wouldn’t look good in bare metal even with the repairs. So we painted it a Kingfisher Blue, a Ducati color from the 1960s Monza. It would give a little nod to Ducati’s heritage, and match well with the metal, brass, and leather.”

With the looks sorted, it was time to make the bike function. Tony machined up bearing spacers for the shaft, and modified a crank set so that the engine would fit in the frame. Then he made the tank and the decorative leather straps that sit on top.

“The hand shifter was an option on the old machines, so we custom made a new setup with all the linkages. Then we added a taillight and a micro LED headlight from Denali—because, why not.” The leather bag behind the seat post hides a small 12V (total loss) battery to power the lighting.

“The lever setup was a bit much on the original, so we streamlined it,” says Tony. “It has a twist throttle now, a clutch with a tailored lever, a dual-pull brake system that actuates both brakes together, and a decompression kill lever on the left thumb.” The throttle is a Biltwell Whiskey, and the rest is from Magura. 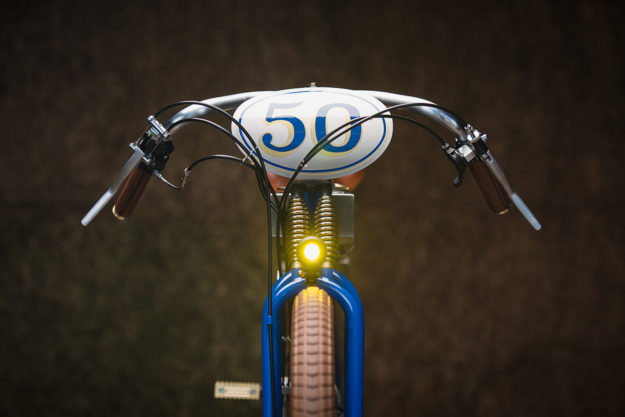 The Cucciolo is sprinkled with lovely brass, aluminum, and stainless steel accents. Free Form Designs CNC’d up a set of brass pedals, and Tony made all the cables in-house, to ensure they fitted just right. Dane Utech of Please Be Seated handled the sublime leatherwork.

After the tank was sanded down and brush-finished, Jason at Artistimo Custom Design clear coated it. He also painted a version of the original ‘Little Puppy’ Cucciolo logo, with matching blue and gold striping. 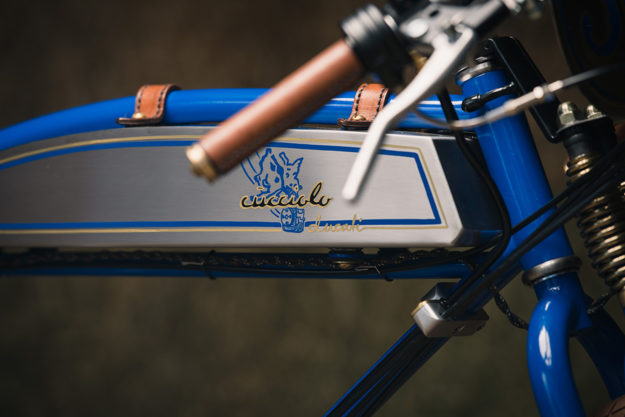 “Del now has six decades of Ducati in his collection,” says Tony. “Some are custom and some are stock, but all are loved, ridden and enjoyed.”

Now that’s what we call passion. If you’re visiting the Barber Vintage Festival this weekend, you can see this baby in the metal. If not, you’ll have to make do with another shot of the Cucciolo with a puppy. 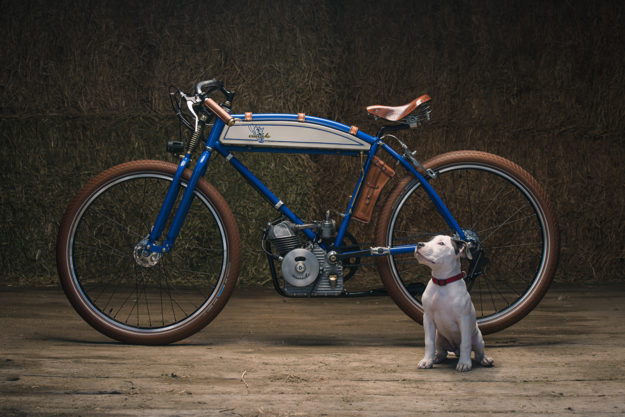