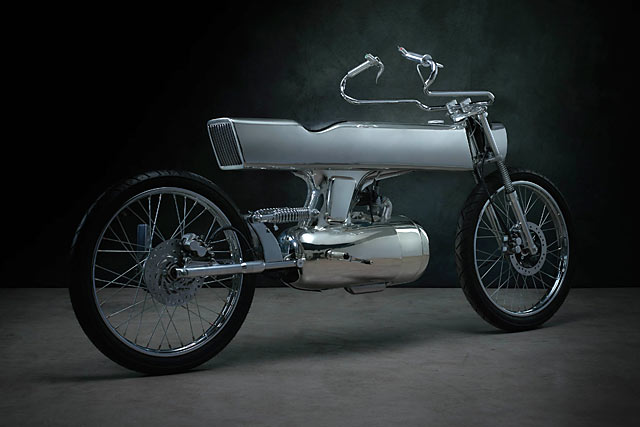 In the 1950’s people had a glassy-eyed vision of the coming millennium. They imagined a  jumpsuit-clad future propelled by sleek, metallic, rocket-shaped cars and bikes to zoom around in. But now we’re here now, and somehow we ended up with the Ford Taurus and the Yamaha TDM. It’s not fair. But Singapore’s Bandit9 aim to change that with their latest build, the Honda-based L•Concept, a motorcycle that blends retro futurism with incredible design engineering. 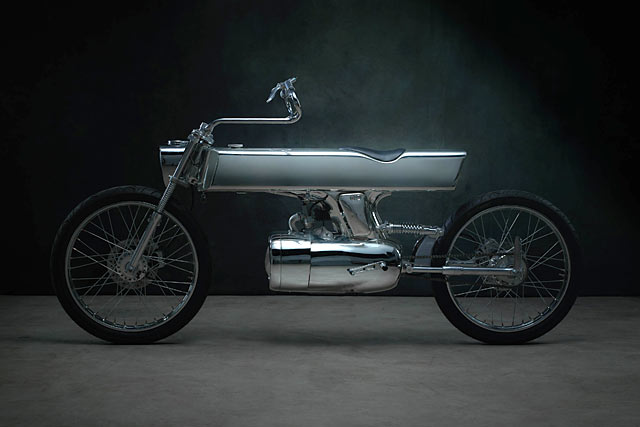 The L•Concept is the next logical step for Bandit9, who have produced some of the most awe-inspiring, jaw-dropping, genre-bending bikes that we’ve featured here on Pipeburn. If you’ve missed their prior work they’re so named because they produce a limited run of nine motorcycles of each of their designs. Their output is exclusive and always different. And the L•Concept is no exception. 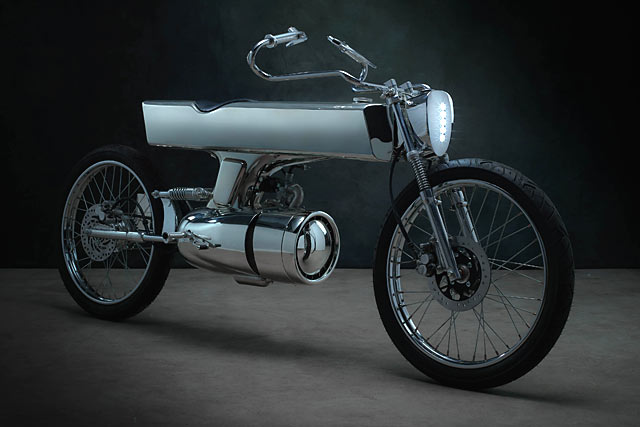 ‘It’s loosely based around a 1967 Honda SuperSport,’ founder and head designer Daryl Villanueva says, ‘Now it’s a 2067 Supersport’. The L•Concept is a tribute to Daryl and his team’s love of sci-fi films and books. ‘It wasn’t about building something futuristic or creating the next thing,’ he says, ‘It was about bringing to life something you’d only see in the pages of comics or in an episode of Star Trek.’ 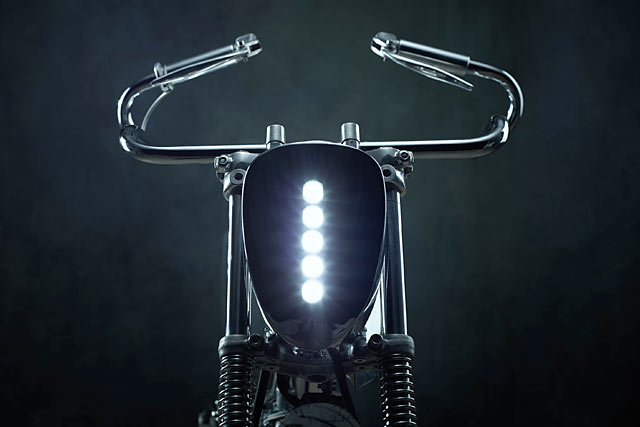 But that look doesn’t come easily. The initial design of the L•Concept actually began two years ago, with Daryl penning the outline and realising that their skillset wasn’t strong enough to make it a reality. But years later and with a score of divergent builds behind them the team is ready to tackle this astonishing stainless steel beauty. 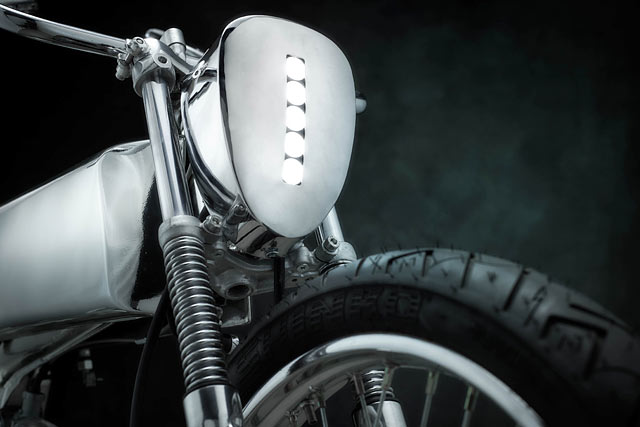 “Just about everything is hand-built and all of it purposeful, with an incredible eye for detail”

Just about everything you see is built from scratch. That’s the stainless steel unibody tank and seat, the teardrop saddle, the insane handlebars made to look like the controls on a speeder, the grips and levers and switches. Just about everything is hand-built and all of it purposeful, with an incredible eye for detail and emphasis on restrained minimalism – with Bandit9 less has always been much, much more. 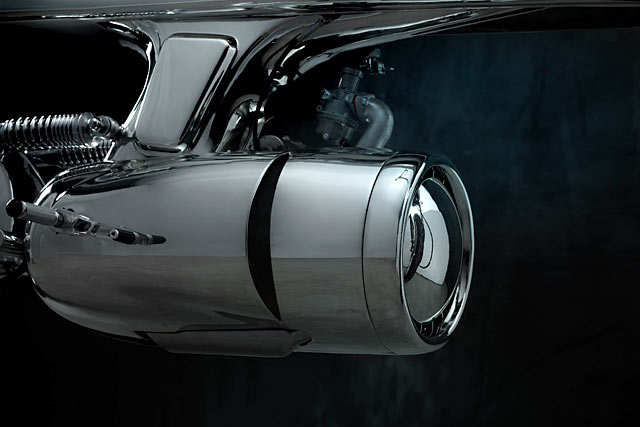 I’ve giv’n her all she’s got captain!

And nothing has been done the easy way. The engine cover, reminiscent of a USS Enterprise reactor, is suspended below the frame. ‘There’s a lot going on underneath that we had to make room for,’ Daryl explains, ‘Everything has to fit correctly so it looks purposeful.’ The exhaust itself takes over 60 hours to make. ‘It was tough to manage the shape and the angle to perfectly underneath the cover,’ Daryl explains, ‘It looks like nothing but that alone is a nightmare to make.’ 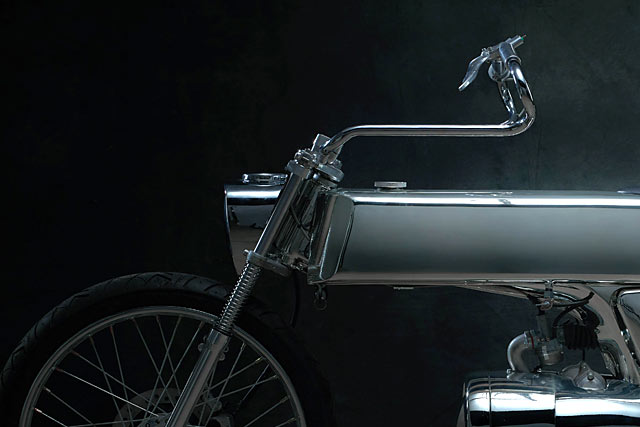 While it’s easy to get bewildered by the overall shape of the L•Concept it’s worth taking a moment to look at some of the finer details. The twin flat shock rear suspension keeps things neat while the rear integrated tail light is reminiscent of HAL and the LED array at the front end is nothing short of beautiful. 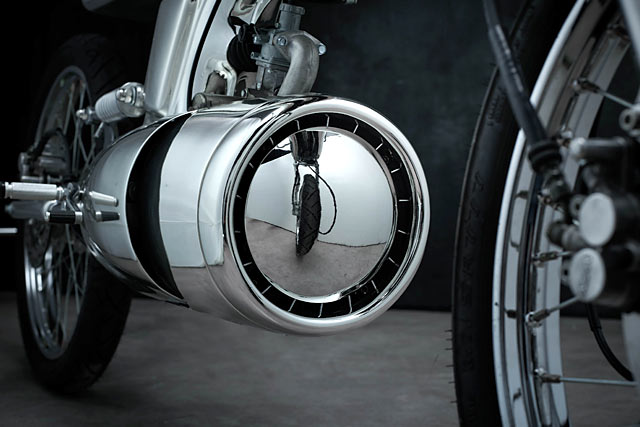 Daryl deliberately tries to avoid picking a genre for any of his builds. ‘I tell my guys to resist the urge to categorize. It pigeonholes our thinking,’ he says. ‘There are enough constraints in the technology, engineering, physics, even in the financing of building the actual bike that the end result will always be “just an attempt” at the ultimate idea rather than a full manifestation of it. We just try to do our best close that gap and make it as exciting as possible.’ 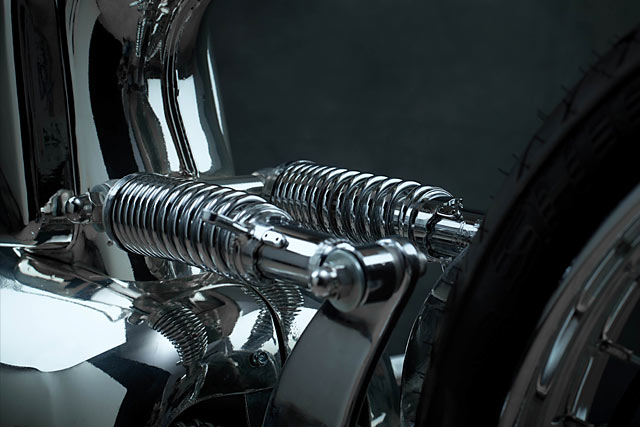 We’re not the only ones who are enamoured with Bandit9’s work. They’ve delivered pieces to the Barber Museum in Alabama and have a few of their works appearing at the Petersen Automotive museum in Los Angeles. In the last few months the team have sent a number of bikes to individuals and collectors in the United Kingdom, Germany, Italy, Spain, the Netherlands and the United states. ‘The guys that acquire our motorcycles are just was whacky as I am,’ Daryl says, ‘And I thought was alone’. 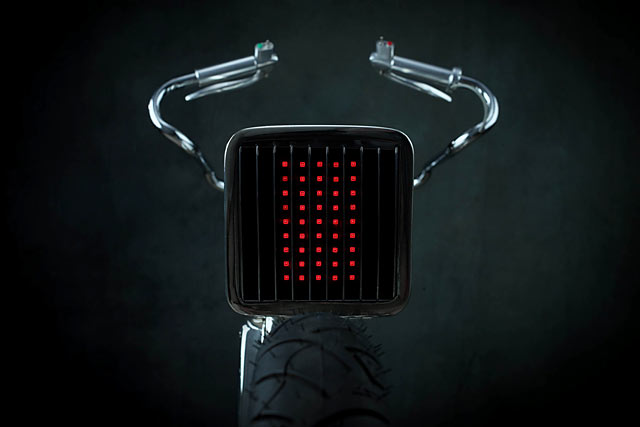 I’m afraid I can’t do that, Daryl

If you want to be part of the select, eccentric crowd that covet the motorcycles Bandit9 produce – get in quick. Five of the nine Hondas have already been ordered.